If you have an Internal Hard Drive installed into a T-Series Barebone unit and you have it done by a professional or you have sufficient experience (i.e. have built PCs or similar) and as long and any faults are not a result of damage while installing a HDD then it will not affect the warranty status of the product and we will service it as normal under the manufacturers warranty.

We would like to stress that you should have a professional do it, if you have sufficient experience to attempt it yourself it is most important that the PVR switched off and is disconnected from the Power and all other devices, do not remove the lid while the PVR is plugged in under any circumstances or you will die!

What are the Power / Restart Options on the T-Series PVRs?

There are two ways to enter the power options menu, the easiest way is to hold down the Power button on the remote control for around 2 seconds (we call this a long press), the Power / Restart options will popup on the screen. The other way is via the Menu, press the Menu button on your remote and scroll to the far right and press OK on Power. 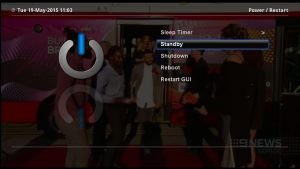 What are the options and what do they do?

Sleep Timer: Set a particular time for your Beyonwiz to either wake up or go to sleep, you can choose whether the Beyonwiz goes to Standby or Deep Standby

Standby: This setting will put the Beyonwiz into a light standby where only the video output will be disables and the front panel will show the Time / Date. This mode is used so that you can still access the PVR via your network and stream Live TV and recordings to your smart phone, Tablet or PC.

Shutdown:This will place the Beyonwiz into a full shutdown. Your Beyonwiz will still wake up for any timers that you have set but your will not be able to accress your PVR via your Network while in Shutdown mode.

Reboot:This will reboot your Beyonwiz and go through the full Booting phase.

Restart GUI:This will just restart the GUI (Graphical User Interface) or the on screen displays, this is allot quicker than a full Reboot and is useful when installing new plugins or making any changes to menu options so that they appear correctly.

Can I buy a Beyonwiz at my Local Retail Outlet?

We do not currently sell via any retail channels, by selling direct to you we find that we can better support our users and in the rare event that anything goes wrong we can act immediately by giving you expert advice and quick solutions. We have one low Australia wide shipping cost of $15 and this is fully insured and traceable.

You can view some videos –Click Here– so you will get an idea of how the user interface works. Also feel free to give us a call if you have any questions before you buy on (02)96031822.

My Beyonwiz is stuck in Booting, what can I do?

If you Beyonwiz T-Series PVR is stuck in Booting it usually means that something has gone wrong during an update to the main software or the installation of a Plugin. The good news is that in most cases you fix this yourself by simply switching off at the wall for around 30seconds and then switching it back on, if that does not work you can reinstall the firmware via USB.

To reinstall the firmware head to our downloads page –Click Here– and select your model number, there will be a how to upgrade guide and also the firmware file itself.

What is firmware and how do I update it?

What is a firmware update?

Firmware is the software that runs your Beyonwiz PVR, much like on your PC or mobile phone. Firmware can be updated just like these other devices to give you new features and additional functions as well as making improvements and fixing bugs. All firmware updates are freely available on our website.

How do I check for an Update?

On the Beyonwiz T-Series you can check the current firmware image version in the PVR menu. Press the Menu button on your remote control and then scroll the the far right using the right arrow button and then press OK on Information, then press OK on About and then note the Last Upgrade date. The date format will be yyyy-mm-dd. Now check the Downloads page as explained below and if the date at the end of the firmware file is later then the date you made note of we recommend that you update the firmware.

Where can I get the firmware update?

How many channels can my Beyonwiz Record?

My remote wont control my Beyonwiz

Check your remotes batteries and put in a fresh set. If the batteries are new and the remote still doesnt work press the button marked “STB” on your Beyonwiz remote to set your remote to Set Top Box control mode and try it again. If you own a Beyonwiz DP-P2, press and hold the OK and “2” buttons on your remote until the STB button flashes red 3 times (approx 10 seconds) then try your remote again. If your remote is in STB mode but still not working with your PVR ensure that all other electronic devices within a 5m range of your Beyonwiz (besides the TV set) are turned off and test again as this will show if other devices might be interfering.

Haven’t found an answer to your problem yet? Try this troubleshooting guide